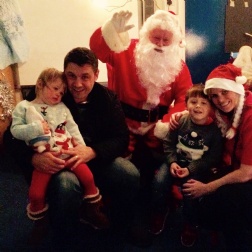 A great time was had by all this Christmas Fayre 2016. We had over 30 selling stalls spread over 2 venues: the school and Sundon Village Hall, across the road from each other. There was an inflatable Go-Kart track in the playground to entertain the children, as well as Santa in his Grotto and giant Olaf wondering around both venues. Sundon Lower School provided refreshments of hotdogs, cakes and drinks, as well as a massive tombola stall, loads of great raffle prizes, a craft table and some of you may have noticed a very special cameo from none other than Mrs Clause herself. We raised over £1000 from our Christmas efforts despite the constant rain and we're looking forward to the next one.